One of the first COLREGS questions that you’ll get in your MCA Orals Exam is lights. This can often feel very intimidating but don’t worry. Although there are a few exceptions that you’ll just need to remember, we can break the rest down into memorable groups.

Like everything in the way we teach MCA orals prep, structure is key. It’s all very well and good knowing the answer, but this is an oral exam so getting the answer across confidently, concisely and precisely is critical.

Decide on an order… and stick to it.

There are normally four components to a lights answer. They are vessel type, length, motion and aspect. Some have additional information, such as a vessel engaged in fishing with outlying gear in excess of 150m, and this can be added on the end.

So, four factors. The only one that really makes sense to go first is vessel type but, after that, arrange the other three however you feel most comfortable. The key thing is that you never change that order. That way, the next factor is always on the tip of your tongue and you’re not having to try to remember which ones you’ve already said.

This may seem a bit silly but, when the pressure is on, making things as automatic as possible can be a lifesaver.

This is fairly simple really and just requires you to learn which formations of lights are which type of vessel. There are some vessel types with clear ID lights, such as RAM, NUC, Vessel Engaged in Fishing/Trawling (VEIF/VEIT), etc. Others, such as Power-Driven Vessels (PDVs) can be recognised because they have masthead lights without any other ID lights. Sailing Vessels have only sidelights without anything else (although they can display red over green, if they want to).

Generally it’s pretty clear cut what the vessel type is, but there are a few oddities. You need to be careful with a vessel Constrained By Draught because it’s also (and can only be) a PDV (it says so in the definition in Rule 3). Also, a Towing Vessel must also be a PDV (Rule 24a & c) and, this is where it gets weird, a Towing Vessel that’s RAM is ALSO a PDV (Rule 27c).

Ok… so we headed into the weeds a bit there, but you get the point.

The number of masthead lights that a vessel is displaying determines its length. For a PDV (Rule 23), if there’s one masthead light then the vessel is “less than 50m in length”. If there’s two it’s “probably 50m or more” because a vessel less than 50m can also display two if it wants to (Rule 23aii). This also applies with RAM, Towing and CBD. If you saw any of them from astern, you can’t determine length. If you can’t, just say “length unknown”; it sounds better than leaving it out.

For VEIF, Sailing Vessels or NUC, you can’t ever determine length because they don’t show masthead lights. VEIT have a weird thing where they display ONE masthead light above and abaft the ID lights and, if they do, they are “probably over 50m”. There are a couple of oddities but that’s the overview.

We can determine how a vessel is moving or not moving on a scale, of sorts. If a vessel isn’t alongside, at anchor or aground, then it is “underway” (Rule 3i). For some vessels, we can tell if they are definitely making way (moving through the water) and for others we can’t. NUC, RAM, VEIF and VEIT are “making way” if they are displaying sidelights/sternlights and are “not making way” if they aren’t and you can only see the ID lights (and the masthead lights for RAM and, sometimes, VEIT). The ones for which we can’t tell, such as PDVs, Sailing Vessels, etc. we just say “probably making way”. Again, this is a little simplified and there are some exceptions, so make sure you check the rules in detail when you’re working these out. 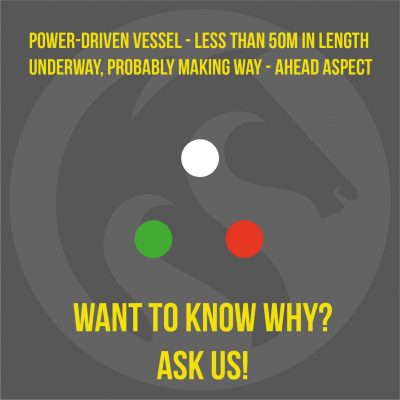 Bringing it all together

We’ve got our structure and content so now it’s time to bring them together into the perfect COLREGS lights answer. If we saw the lights in the image above we would take a breath and then confidently say; “This is a power-driven vessel, less than 50m in length, underway and probably making way, seen from ahead”.

Our advice is don’t get too hung up on using exactly these words. Some lecturers/tutors have slightly different wordings and while some get very excited about it, mostly it doesn’t matter too much. A good example of this is the entirely pointless argument around using possibly vs. probably. No, it doesn’t matter which one you say, but we prefer probably.

The key thing is to make sure that you’re confident with your lights. Then, practice answering concisely and precisely, so the examiner in no doubt that you know exactly what you’re talking about. Then, you pass. Simple.

If only it was that simple… 🙂

We’re on your side

All these COLREGS lights can be a bit overwhelming but don’t forget that we’re here to help! Just send us a message if you’re stuck on something. If you want some more info on our orals prep, click here.

Don’t forget that orals reports are the best way to see which COLREGS lights questions are commonly being asked. Check out our blog on orals reports and then access the orals reports (for free) on the Whitehorse Maritime’s Orals Reports Facebook group.

How To Study For Your MCA Oral Exam

How To Pass Your MCA Oral Exam – #4 – Practice Out Loud